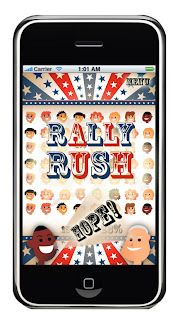 There is very little doubt to the historical significance of 2008 presidential campaign. Not unlike most people, we at RightSprite are also raveled in this political intrigue with unabated enthusiasm. In the spirit of this event, we felt that we should create a game to commemorate this historical landmark. And we call it Campaign Trail.

The concept of Campaign Trail came from a popular game Puzzle Quest. Campaign Trail utilizes a very familiar “match-3-symbols-in-a-row” type gameplay. The “symbols” in Campaign Trail are voters. However, instead of a solo gameplay, You may choose to be a “blue candidate” or a “red candidate.” Campaign Trail will pitch you against a computer opponent through 50 increasingly difficult levels. I am not going to give away all the surprises here, but there are additional elements imbued into the game to boost its strategic depth.

Campaign Trail is scheduled to be released at right around the election day. Even if you are not into politics, you should enjoy the familiar gameplay with the added twists. Pick up a copy when it’s released and check it out for yourself!